Pride and Prejudice: The Comic Book, Chapter One 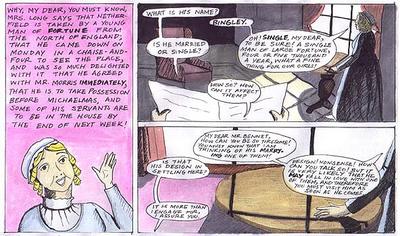 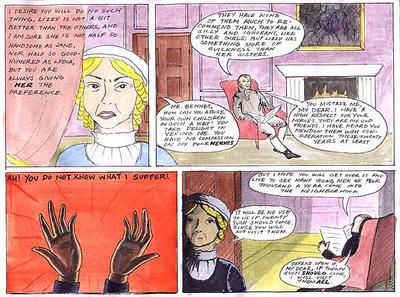 So, for those of you who know me, you may know that I am completely obsessed with Pride and Prejudice by Jane Austen. Many years ago, I was in a major 18th and 19th century English literature phase. Eric kept mocking the books I was reading although he didn't know anything about them, perceiving them as chick lit, which may or may not be an accurate assessment of the genre. Regardless, the mocking got to me, and I determined that, one way or another, Eric would read Pride and Prejudice.
Anyway... eventually I decided that I would make a comic book adaptation of Pride and Prejudice. This may not seem like the best choice for a comic book, and I would have to agree in some respects. For one thing, it's 61 chapters and 400-some pages long. After I started this project, I felt that I probably should have chosen a book that was not only shorter, but more suited to the comic book format (i.e., more action, and less sitting around in drawing rooms discussing one's views on the accomplished woman). I do, however, enjoy the idea of taking a really girly book like Pride and Prejudice and putting it in a format that is often more associated with the masculine domain, the comic book.
Unfortunately, working on the comic is rather a low priority since it's something I'm doing for my own entertainment, and not something I am creating for sale or to enhance my portfolio. Consequently, it's taken at least five years to get where I am now, and I'm only about a quarter of the way through the novel.
Posted by Liz Wong at 3:23 PM

Email ThisBlogThis!Share to TwitterShare to FacebookShare to Pinterest
Labels: Pride and Prejudice the Comic Book

This is so cool, and I think it is a commercially viable thing, too. I too am obsessed with Pride & Prejudice. Nick...not so much. But I know he would read a comic book! I just know it!

Well, I don't know if it is commercially viable. While you might think that it has two potential markets - the P&P crowd and the comic crowd - in reality probably neither of them would want to read it.

The Pride and Prejudice fans would probably just want to read the book, not the abridged comic book version.

Comic book fans would rather read a comic about something they are interested in.

So, unfortunately, I think this comic is just for nerds like us. Ha ha ha! Nerds!!

Let me shop this around to a few other P&P nerds that I happen to know (there are at least three). Then we can input this information into the white paper we will submit to the publishing houses.

I just mentioned you in a comment. Query: did I ever give you a Don Ho record called "Don't Sneeze When You Eat Saimin"? If I've imagined this or made this up, well...I don't know what that says about my subconscious. It's actually kind of scary to think about.

I love this! I want to read the whole thing, so you need to finish it and I can't wait 15 more years, so get on it!

Also, I too think it's commercially viable. When/if you finish it you should shop it around to publishers and let them be the judge. Who cares if it sells a million copies or 1 copy? Just having it published in book form out there in the world would be cool!

Also, FYI, the second group of pics don't enlarge when you click on them; it just goes back to the first ones. Since I'm blind as a bat, I can only read it when it's big and I would appreciate you fixing this as soon as possible so I can find out who's letting Netherfield Park!

Okay, the problem has been fixed, so Patrick can now solve the mystery of who is letting Netherfield Park.

And yes, Zee, you did give me that record. It's not Don Ho, though, it's some Hawaiian comedian. I'm not sure if we still have it around or not...

Hi, Your Pride & Prejudice comic book is Ace !
Charecters esp. Mrs bennet, Miss Bingley, Darcy are immediately recognizable. Nice Regency touches- Lizzy's reticle, the wall papers....impressed with your use of Jane Austen's own dialogue.
Respectfully disagree your P&P comic book is not commercially viable; people love novelty. I reckon the Pride & Prejudice crowd would be in raptures !
In mid-May, Graphic Classic's will publish Austen's Northanger Abbey as a comic book. I'd love you to see your P&P comic book complete.
Many thanks.

Thanks! I'm glad you like it.
I have to say, I can't imagine not using Jane Austen's language; isn't that part of what makes the book great?

I didn't realize there was a Northanger Abbey comic coming out! I'll have to check it out. What a weird one to choose to issue in comic form, though. I guess it is shorter than her other works, and there is that gothic aspect that would look good visually.